Coming out of the small southern town of Davidson, NC, Rusty writes music about life, love, loss and rebirth (you may find a couple of songs about mischief and alcohol too).  Traveling across the southeast most of his life and having a very large family has given him the insight and experiences that fill up a songwriter's journal with poems, ballads, prayers and random confusion...makes for some great songs!

Rusty's freshman CD, "Reason Why", was more than a mere introduction to the music world.  Janet Goodman's review in Music News Nashville says: "With a straightforward everyman's voice, Rusty brings lyrics that are down and dirty honest, from a reservoir of lifetime tales".   "JUDGEMENT" the long awaited sophomore CD is out, available and amazing. Order your copy today...you won't be disappointed.

Rusty has added another aspect to his already slightly full life.  In 2017, after successfully helping stop a major development in downtown Davidson, Rusty was elected Mayor…..yup, he is the Mayor of his hometown.  Working daily to keep this special place that so many cherish provides many more paths to cross, many more stories to draw from and a different perspective on life.

Me and good friend Steven Davidson will be up to no good. Come out for some cold beverages and music.

Music at the Market

Nothing better than picking at the David Dyson Farmers Market!!!

Glad to be back at Eleven Lakes. Jim Ashton will be sitting beside me and I'll be drinking a River Otter Red! 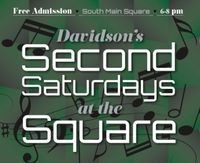 Jim Ashton and yours truly will be picking a few. Paul Atkinson opens for us.